Protecting Your Rights,
Your Freedom and Your Future
Request Your Consultation
Home
Attorney Profiles
Travis Moeller 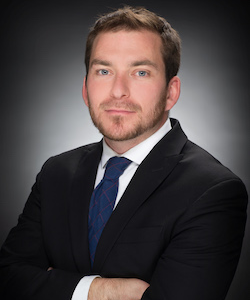 Travis Moeller is an associate attorney at Blair & Kim and a recent graduate of Seattle University School of Law. Travis practices criminal defense, family law, and personal injury law. Travis previously worked as a Rule 9 intern at Blair & Kim during his second and third year of law school.

Travis graduated from Seattle University Cum Laude and achieved CALI awards in Legal Writing and Professional Responsibility during his time in law school, which are given to the student who earns the top grade in a class. During law school, Travis was a student fellow at the Fred T. Korematsu Center for Law and Equality and was a member of the Civil Rights Amicus Brief Project. Travis and two other students successfully represented an inmate in the Ninth Circuit Court of Appeals arguing that the inmate had been denied his right to court access in violation of both the First and Fourteenth Amendments.

Prior to joining Blair & Kim, Travis worked as an extern to the Honorable Hollis Hill at the King County Juvenile Court, where he primarily worked with the Family Treatment Court, which is an alternative to Dependency Court for parents who need access to drug and alcohol treatment and individualized services to support the family. Travis also worked as a research assistant for Professor Carmen Gonzalez and interned at the Moderate Means Program, which helps connect low income clients with lawyers who offer legal assistance at a reduced fee.

Contact us
Practice Areas
Client Reviews
★★★★★
Mark C. Blair has no rival in his field in Seattle. A consummate professional. Communication was brief, straightforward, easy to understand, and without a typical condescending tone you can sometimes experience from attorneys on top of their field. Correspondence was timely and always affective. Any in need of criminal defense, should have a conversation with Mr. Blair, and you will quickly see and feel, no further contacts, referrals, or phone calls need be made. The money and time that can be saved by streamlining future contact and collateral damage in the sentencing process will far and away be worth every penny of the fee structure. Thank you very very much Mark Blair. N.Mark French
★★★★★
Sara Kim of BlairKim is a great attorney. I had never before had representation or dealt with the legal system and she made it very easy for me. She converted the legalese into laymans terms for me and helped me to understand the steps of the process. When I hesitated on certain decisions, Sara gave me the confidence and encouragement to proceed – especially since it was most beneficial to me in the long run. Sara is very straightforward and professional while also being personable and pleasant to deal with. Tamara
★★★★★
Sara Kim was the perfect lawyer for our situation. We were determined not to involve the courts in our divorce. Within the first 30 minutes of consultation, Sara proposed an equitable formula for division of property which we used to negotiate an agreement that felt fair to both of us. Our flat fee arrangement with Sara covered the filing of paperwork which alleviated much pressure for us during a very stressful time. I highly recommend Sara for her flexibility, professionalism, and efficiency. Carrie
View More
Submit a Law Firm Client Review